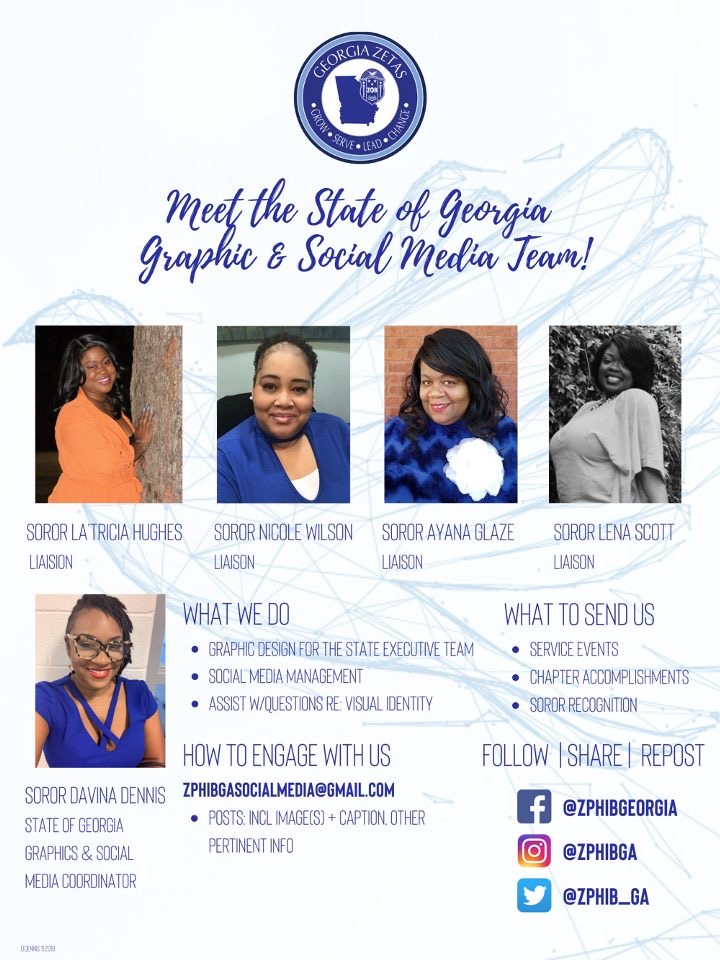 As we move closer to the 100th anniversary of the founding of our beloved sisterhood, the great State of Georgia continues to work toward our vision of “One Zeta”—“Always and in All Ways!” With that goal in mind, the state announced the formation of our Centennial Year Graphics & Social Media Team. And Sigma Omega Zeta Chapter is pleased that our very own, Soror Ayana Glaze, has been named as a liaison on the team along with Sorors LaTricia Hughes, Nicole Wilson, and Lena Scott; and Soror Davina Dennis, who serves as the Social Media Coordinator. In addition to creating graphic designs for the state executive team and social media management, the team will also address any questions or issues regarding the visual identity of the state.

Sigma Omega Zeta chapter has already been privy to the talent that Soror Glaze will contribute. And in a recent interview, she explained the day-to-day duties of the newly formed team. “Essentially we check out other chapter’s social media profiles and reach out to them to learn what they are doing in their communities, their service projects, and any accomplishments in their chapters. We then take their correspondence and share it on the State of Georgia’s  Facebook, Instagram, and Twitter accounts,” said Glaze. Additionally, the media team will also support Madame State Director, Vicki L. Pearson, by creating graphics for any initiatives she puts forth, manuals, and for graphics for state conferences. Each member of the media team will be assigned to cover a “particular geographical region” of the state to monitor them for news, events, and information—then share it with the state website.

We all know that when Zeta calls, we are compelled to answer. With so much activity happening as we approach the centennial year, state leadership recognized that there was a void that needed to be fulfilled and sought out Sorors with the skill level to handle the social media and graphic needs of the state. With the assistance of chapter presidents, the candidates were recommended and/or encouraged to apply. Having worked in the same capacity on the chapter level, Soror Glaze expressed her interest in working on the state level. When the call went out, Chapter President, Renea Johnson immediately thought of Glaze.

Along with the state media team, Soror Glaze will continue her work in the chapter on the public relations committee as the website manager, and unofficial co-chair to Soror Dr. Karen Woods, who Glaze says, “has done an amazing job of taking this committee to a whole other level.” For the chapter, Glaze reviews and edits items for the site, and is responsible for knowing the visual identity standards that come down from nationals and educating the chapter on these standards” when preparing to publish something on the site. “So there’s a lot of overlap with what I do with the state because our team is responsible for making sure that whatever we put out meets those standards.” She explained. “So the good thing about me being a part of this team,” she added, “is that it’s helping me to do my job with SOZ better.”

If you ask Soror Glaze what has prepared her for this position with the state, she’ll tell you, “I’ve been a Zeta since 1993—26 years— a long time! And I’ve been in different positions within Zeta on undergraduate chapter levels and on graduate levels.” She explained. And it is true, Glaze was treasurer for Epsilon Xi at Georgia Southern University, and the Graduate Advisor to Mu Mu Chapter (the chapter under which she pledged) for Omicron Alpha Zeta in Americus, Georgia. Upon joining Sigma Omega Zeta, Glaze served as Historian and Website Coordinator for the chapter. But Glaze admits, “For a long time, I didn’t want to hold any type of office, I just wanted to be a Zeta; do work on the website, help with social media, and just be a Zeta.” However, at a recent state conference, Glaze recalled, that the question was asked: “What can we do to make Zeta better? And who’s going to take the charge?” It was then that Glaze decided, “Although I’m okay with being in the background, it is now time for me to step up.” A mother of three, Glaze says she also wants to do this for her nine-year-old daughter, “I want to raise a Zeta—and create a legacy.”

Soror Glaze is excited about the coming events for Centennial. When pressed to give out any special celebrations for the state, she says there is something in the works, but she is not at liberty to talk about it just yet. But when asked for her expectations for the Graphics & Social Media Team and outlook for the state of Georgia, she said, “Our media team will be the team that other states and the region will look to and say, this is how a media team should operate. I look for us to set the bar. We will set the standard for others to follow. I am working with some amazing and hugely talented women, this is what we do in our day-to-day work, this is what we know, our areas of expertise—and we have been blessed to be able to bring this to Zeta.” 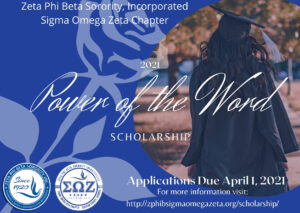